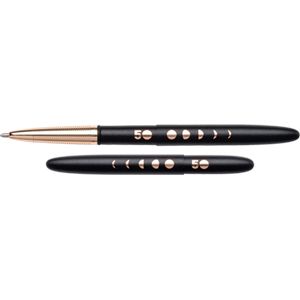 The iconic Bullet Space Pen celebrates the historic role the original Fisher Space Pen played in space exploration starting with Apollo 7 in 1968. A great gift that also celebrates the 50th anniversary of the landing on the moon. Measures 5 3/8” open, 3 7/8” closed.

The original Bullet Space Pen was conceived in July of 1948 by Paul Fisher arguably the most popular pen of the twentieth century. Fisher Space Pen rose to prominence when founder Paul Fisher invented a retractable, pressurized pen called the Anti-Gravity 7 (#AG7) that worked flawlessly in zero gravity aboard the first manned Apollo mission in 1968. Five decades later the company continues to thrive with pens still flown aboard every manned space flight.

All Fisher Space Pens are handcrafted and able to write underwater, over grease, at any angle, upside down, 3-times longer than the average pen, in extreme temperatures ranging from (-30°F to +250°F), and in zero gravity.

Cited as an outstanding example of industrial art, the classic design of the Fisher Bullet Pen has a place in the permanent collection in the New York Museum of Modern Art. 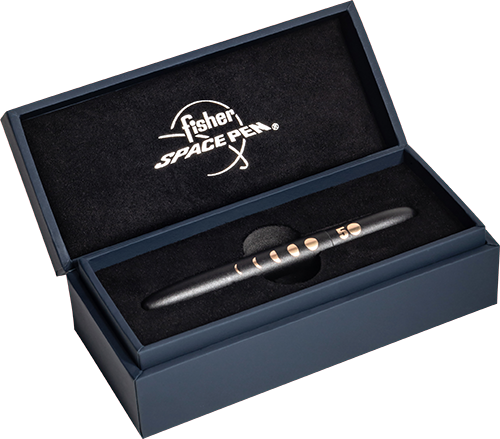